I have beagun to practice the songs from the  Songbook Choro. For every piece I try to find recordings or videos. There are 97 choros in this songbook, and I will nedd some time to complete this, and maybe I will leave out some of the pieces.

Enlish Version will be updated later

I have skipped this, the melody goes  down to the lower F - it is too low for the mandolin.

I like to play this, it's really fun. I have played it very often and lerant it by heart.

There is a video played on the flute by Dudu da Flauto:

Agüenta Seu Fulgencio is a very popular tune. I have found several youtube videos. I like this tune, the first part includes a very tricky part that needs some practice!

A fantastic waltz! I knew that I had heard this melody, then I found the recording on my Jacob do Bandolim CD.

Easy to be played, but with tremolo if possible. Would be also good for a version for mandolin orchestra.

Jacob do Bandolim plays this a bit to hard, I would prefer a softer version.

You can find another recording of Alma Brasileira ion the Homepage of the small mandolin orchestra Spokandolin.

I have not played this spanisch influenced choro yet. You can find a short example from a CD by Jacob do bandolim at:

This is a special composition for the mandolin with many chords and certainly not easy to play. It was recorded for the CD Domingo Na Geral by Cristóvăo Bastos and the group Nó em Pingo D'Água. A short example can be found on Domingo Na Geral

This choro has been recorded with trumpet by Joatan Nascimento on his CD Eu Choro Assim. A short example can be found at cliquemusic.uol.com.br

This choro is quite easy, only the second part in g-minor is a little more difficult.

This seams to be one of the favorites of Armadinho, there are several version by hin at youtube: Version von Armadinho 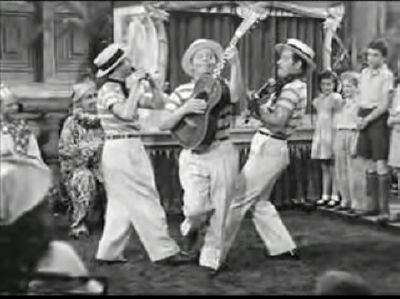 Another version is used as the background music in the movie Road to Rio (1947) with Bob Hope and Bing Crosby. Most of the time the music is heard in the background, but in the end the dancing musicians are shown - very funny!

This tune is also contained in my Jacom do Bandolim book - one of my favorites.

This is one of the often played Choros by Jacob do Bandolim.

A selection of the most interesting videos:

Atlantico is one of the well known choros by Ernesto Nazareth.  This video is played by an inknown group, the melody is first played by a flute. Later a cavaquinho and a piano take over the melody.

A short example can be found at Jacob do Bandolim

Atraente was composed by the female composer Chiquinha Gonzaga (1847-1935)

She composed the first carneval song Abra Alas in history and is known as the mother of all  carneval prozessions. Atraent was her first successfull composition in 1877.

I found a video of the pianist Clara Sverne who played Atraent for the 160th birthday of Chiquinha Gonzaga. Atraente is the last piece in the video.

Another videos shows Talitha Perese with a trio with gitar, cavaquinho and pandeiro.

You can find a free score of Atraente at  www.free-scores.com

Another source for information abaout Chiquinha Gonzaga is the homepage dedicated to her: www.chiquinhagonzaga.com

I have not found videos of this piece yet.

Benzinho is another well known choro by Jacob do Bandolim. I have found 3 videos at youtube, including an interesting duo with jazz-guitarists Howard Alden and Michele Ramo. So Benzinho can also be played in a jazzy way.

This is one of my favorite choros at the moment. As it is a slower one, it is good to start wih - it is not so difficult.

I have found 3 videos at youtube until now, where the melody is played by flute, cavaquinho and mandolin.

Ther are also some videos of a group named after this song: Videos of the Groupo Canarinho Teimoso

Carinhoso is one of the most popular choros in this selection - everybody in Brazil knows this and can sing it.

There are many youtube videos of Carinhoso, I found the following videos most interesting:

Nicanor Teixeira is a Brazilian guitarist and composer. I have not found a video with the Carioca No. 1, but I have found a recording of this piece in the blog:

In this blog you can download a complete one hour radio broadcast by Fábio Zanon with music played and composed by Nicanor Teixeira.

The Carioca 1 is a nice chord progression and is not too difficult.

From this blog you can also find another interesting series of broadcasts by Fábio Zanon - a series about the art of the guitar, beginning with Llobet and Pujol, Agustin Barrios, Segovia until the beginning of the 21st century:

After a break for some time I have returned to the songbook choro and have dicovered the Chorinho na gafieira, a more slow choro composed by Astor Silva who was a trombone player and popular arranger and producer.

I have found two versions at youtube, first a recording from the "Show do Sardinha's Club" beim  "Festival Sul Americano". The melody  is played by trombone, followed by Eduardo Neves (flute) and Bernardo Bosísio (7-string guitar). The bandolim in this video is played by Rodrigio Lessa, who also playes a nice solo. This choro is played in a jazzy mood.

The second video is similar, also with trombone, flute and clarinet. The music is used for a dance performace.

Flor Amorosa was composed by Joaquim Callado in the 19t, century. Callado is said to have used the term "choro" for the first time in history. Youo can find more information about Flor Amorosa, the composer and some links in the  Choro Blog

This is a fantastic composition, one of the best pieces by Luperce Mirandy in my opinion.

Revendo o passado - a composition by Freire Junior - has been played by Baden Powell, and I have found a youtube video of a TV show where he plays this piece. I have found some other videos with solo-guitar, but no video with a band.

A beautiful recording from a guitar workshop in rio in 1992 can be found in the Loronix Blog - in this version the melody is played by a bandolim, and it is played very, very well. Unfortunately there is no information about the name of the bandolim player.

This is my youtube playlist for Revendo o Passado:

Se Ela Perguntar is a piece that is played very often as a solo piece on the guitar, however it is also very good to be played with a mandolin  or mandolin with guitar.

I will collect some interesting videos in my Playlist Se Ela Perguntar.